Android 4.4.3 Full list of changes and images of UI tweaks

Google has just released its Android 4.4.3 for the Nexus 5, Nexus 4, Nexus 7 and Nexus 10. The long awaited update brings some much needed bug fixes and several UI tweaks, lets take a more in-depth look at the full list of changes:

Dialer App disappearing: Some users are reporting their dialer app disappearing after upgrading to 4.4.3, if this has happened to you, it can be solved by navigating to Settings > Apps > All > Phone and click “Uninstall Updates” then proceed to click Yes when it asks you to “Replace this update with the factory version”

As you can see there haven’t been a whole lot of UI changes except the new Dialer app, the update contains mainly bug fixes and performance improvements. Take a look at our post regarding What devices will get Android 4,4,3 in the future. Find any interesting changes in 4.4.3? Let us know in a comment! 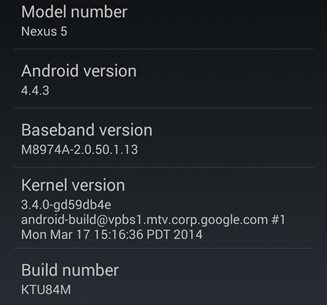