More and more Samsung Galaxy S4 owners have reported their smartphone catching fire while charging. Yet another user has reported on Reddit  that his 9 month old Galaxy S4 cached fire last night after leaving it in the charger, he claims the smartphone was covered in “some wet, smelly substance” (caused by the leaking battery)

For those wondering why the phone has no signal, its because of the antena being next to the charger. Here is a picture of the burned charger 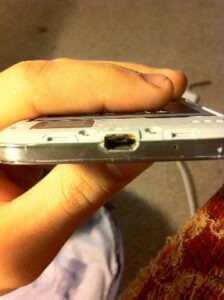 This isn’t the first Galaxy S4 to catch fire and it seems to be happening more often, several weeks back a man’s apartment in Hong Kong burned down due to a Galaxy S4 caching fire. Recently a Canadian youtuber which goes by the name of Ghostlyrich uploaded several videos regarding his Galaxy S4. After he posted the video, he got a letter from Samsung asking him to remove the video from youtube in order to get a replacement smartphone from a “similar model” and asking him to keep complete silence about the matter and denying everything regarding his smartphone catching fire, for those interested in reading the full letter you can do so here. Here is the video from Ghostlyrich:


The problem seems to happen due to a battery malfunction, the chemical substances in the battery can cause an explosion and create a small fireball, we recommend you follow these steps in order to make sure you are save and your smartphone doesn’t explode:

Update: In Germany a Galaxy S4 has exploded while charging on a baby’s changing table. Full Article. Here are the related pictures:

A UX designer is a user experience designer. UX design centers on the interaction between…

Cloud-based systems are one of the most easily misunderstood innovations in the tech industry. Operating…