In Europe and the US the most used search engine is by far Google, with over 67% of all searches made on Google compared to 17% Bing and 12% Yahoo. Surprisingly Google has only a 2% market share in China, and dropping!

Google has a lot of competence in China with search engines like Baidu which owns 69% of the market in China and Qihoo 360 which has 15%, this makes Google rank 5th in the top 10 search engines in China still before Yahoo and Bing. 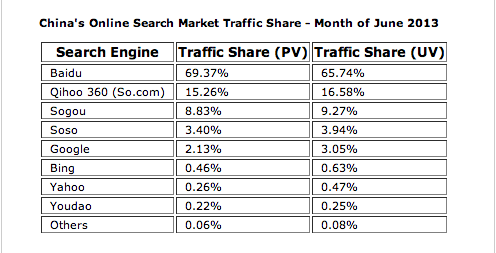 However CEO of Qihoo Zhou Yongyi wants to reach 15% to 20% market share to “destroy” Baidu’s monopoly. Google has had lots of trouble getting into the Chinees market since it got blocked by the Chinees government back in 2010 and has since then “left the market”.